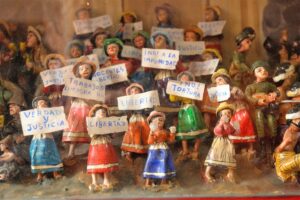 In 1921 – 100 years ago – the first election with universal and equal suffrage for both women and men was held in Sweden. This achievement owed itself to the long and hard struggle by politically active women and men to achieve equality where women’s votes would be valued the same as men’s. It was also in this election that Kerstin Hesselgren, Elisabeth Tamm, Bertha Wellin, Agda Östlund and Nelly Thüring were the first five women elected to the Swedish Parliament – Riksdagen.

Today, 100 years later, Sweden ranks first on the EU Gender Equality Index. The country performs best in the domains of Health (which measures gender equality in health status, behaviour and access to health services) and Time (which measures gender inequalities in time spent on domestic and care work as well as social activities). However, Sweden ranks 6th on economic equality and Swedish women earn on average SEK 3,700 less every month than men, which means that while men in Sweden are paid for their entire working day from 8:00-17:00, women work for free after 16:12.

The current pandemic has stalled the progress on gender equality in Sweden and globally and, in many instances, even reversed it. In particular, Swedish women with lower economic and educational status are worst hit with loss of employment, loss of income due to reduced working hours and illness, and increased workload. In Sweden and globally it is reported that COVID-19 has led to increased levels of gender-based violence with women and girls being affected the worst.

As the world slowly adapts to the new “normal” and learns to recover from COVID-19, the fight for gender equality will need to remain the prominent focus on the agenda for Sweden and the world. We at NCG Sweden will continue to play our part and hope to continue our contribution in building a more equal and resilient world for all.